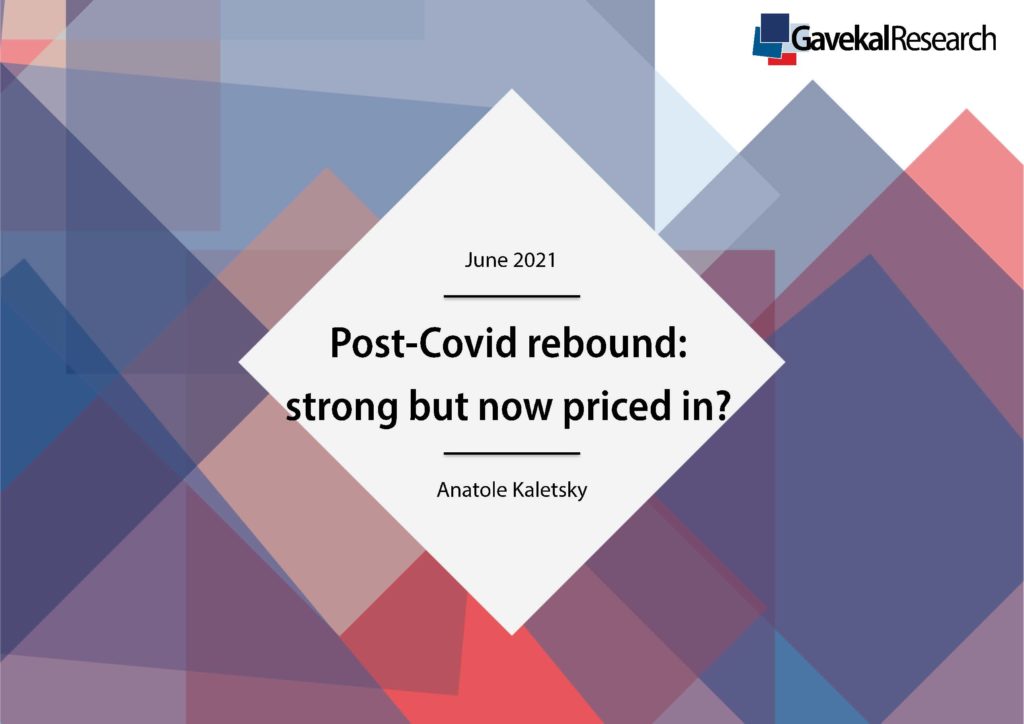 It has been clear since March 2020 when the pandemic struck that the world has been grappling with a completely different situation to anything anyone has experienced previously. The dramatic collapse in economic activity and equally unprecedented monetary and fiscal expansion was unparalleled in recent history. The experience of 2020 and 2021 has been opposite in the sense that last year the economy was in a state of collapse, while financial markets were booming, and this year the economy has been recovering fast, while since February financial markets response has been more muted. Now a year on from the initial panic investors are starting to look forward to what the consequences will be, particularly as regards inflation.

The consensus among market commentators is that the world will experience higher inflation from the middle of the current decade. There are strong reasons for this. Monetary policy is actively trying to generate inflation; fiscal policy is ultra-expansionary with governments and central banks globally united in pursuing growth rather than price stability; the reduction in globalisation as a result of the trade dispute with China; the emergence of technology monopolies leading to the threat that disinflationary pressures will be lessened; political trends favouring labour more; and demographics being less favourable. These are all compelling reasons and it is hard to believe that there won’t be some inflation. Certainly the relentless trend of disinflation that has prevailed for the last thirty years is being interrupted. However the concerns of many in the market that inflation is going to return to levels that did so much damage in the 1970’s may be misplaced. A more benign scenario is possible, and even likely.

Future inflation may be more like that seen in the 1950’s. What is important is how high inflation reaches and how quickly it gets there. A sudden jump to 5% plus inflation would be very challenging for markets. But if inflation creeps up gradually and remains in the 1 – 3% range the markets should be comfortable with this because it will be accompanied by strong growth. This is why the 1950’s comparison is relevant because in the 1945 – 1965 period macro policies targeted growth and employment in the same way as now. Encouragingly the markets at the moment are subscribing to this outcome. Despite the plethora of inflation fears from commentators both bonds and equities are behaving as though the economy and profits will continue to expand for the next five years. The reason that markets are sanguine about inflation is probably because the scale of the economic collapse was such that it will be difficult for inflation to get traction. There are temporary shortages and bottle necks in certain areas, but overall there is too much excess capacity. In particular unemployment remains high so it will be hard for workers to achieve structurally higher wages. Equally the exceptionally strong growth that we are witnessing now will not be sustained. The re-opening boom is by definition a one off. Over the next year the imbalances in the economy should adjust and the market be able to grow higher growth than we had over the last decade, and while inflation will also be higher it will not be high enough to derail equity markets.

This leads to the following investment conclusions. Bonds will slowly lose their purchasing power. Yields are so low that they are unattractive, but they are unlikely to move dramatically. The expectation is that the yield of the US 10-year will move in the range of 1 – 2% for the rest of this year. Given this equities remain reasonably priced, and those outside the US are cheap. On a five year view the rotation from growth to value should continue thanks to the better economy. However short term growth shares, driven by technology, may have a final surge. The Nasdaq chart looks very similar today to where it was in the summer of 1999 before the final blow off at the end of 1999 and early 2000. Many technology shares look very overvalued relative to their fundamentals, but that won’t stop them going much higher if the market becomes enthused by growth again as inflation fears dissipate. After that the value trend should reassert itself, and that is likely to benefit companies outside the US. In currency markets the dollar looks well supported for the rest of this year, but as flows move out of the US it will decline. Asian currencies are likely to be the principal beneficiary of this.

Past performance is not indicative of future results. The views, strategies and financial instruments described in this document may not be suitable for all investors. Opinions expressed are current opinions as of date(s) appearing in this material only.

References to market or composite indices, benchmarks or other measures of relative market performance over a specified period of time are provided for your information only. Notz, Stucki provides no warranty and makes no representation of any kind whatsoever regarding the accuracy and completeness of any data, including financial market data, quotes, research notes or other financial instrument referred to in this document.

This document does not constitute an offer or solicitation to any person in any jurisdiction in which such offer or solicitation is not authorized or to any person to whom it would be unlawful to make such offer or solicitation. Any reference in this document to specific securities and issuers are for illustrative purposes only, and should not be interpreted as recommendations to purchase or sell those securities. References in this document to investment funds that have not been registered with the FINMA cannot be distributed in or from Switzerland except to certain categories of eligible investors. Some of the entities of the Notz Stucki Group or its clients may hold a position in the financial instruments of any issuer discussed herein, or act as advisor to any such issuer.