Chart of the Month – FED vs Growth for Emerging Markets

FED vs Growth for Emerging Markets 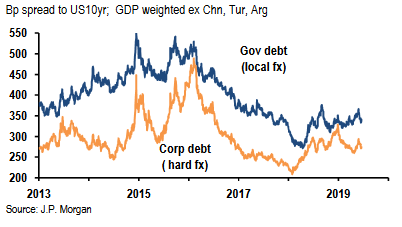 We are generally not fan of discussing EM as a single group as countries’ profiles and reaction functions are increasingly different from a country to another. But for the sake of simplification in this monthly chart we would assume so.

So which EM asset class would benefit most in the context of renewed global monetary easing? That would not only depend on short-term rates at the FED and the ECB. For EM currencies, as the FED move dovish, all major EM central banks are also expected to cut their policy rates. While the possible FED resumption of an easing cycle has recently pushed most EM currencies higher, the next leg up might take some time to materialise. The market might now wait for actual cut to materialise and growth to improve (including some sort of trade tensions resolution or truce between the US and China). The other ingredient needed to support EM currencies and local debt more generally, is inflation which in both the US and EM (collectively or individually) should stay contained.

For EM credit, a mild or even sluggish growth would be enough for the asset class to keep performing in the context of dovish central banks and contained inflation.

The real underperformer so far is EM equity and more specifically Asia Equity complex. In the case of EM equity, a higher inflation would be much better absorbed if growth rebounds and trade conflict is contained or resolved.